The navigation and positioning module provides the current posture information and position information of the infrared thermal imaging inspection robot for the base station system, which is mainly realized by the hardware circuit. The surrounding environment information of the inspection robot is collected through various sensors to provide the basis for the robot's motion behavior. The navigation of the infrared thermal imaging inspection robot at Jiu'an Station uses tracked navigation, that is, a magnetic strip is laid on the ground of the equipment area as the trajectory of the inspection robot, and a magnetic sensor is installed on the front of the robot to detect the magnetic trajectory The signal is connected to its motor controller through the port. An ultrasonic sensor is installed in the front of the robot, which is connected to its motor controller through road signals to realize the function of autonomously stopping the robot.

The motion control module relies on the magnetic sensor information detected by the navigation and positioning module to realize the automatic navigation of the infrared thermal imaging inspection robot, and at the same time receives the commands of the industrial computer control module to realize the accurate positioning of the robot. The first two wheels of the inspection robot are driving wheels, which are driven by a DC brushless servo motor, and the steering of the robot is realized by using the differential speed. The motor controller communicates with the industrial computer control module through the serial port, receives control commands from the industrial computer control module, and executes corresponding actions. The motor controller is connected to the navigation and positioning module through the port, and autonomously repairs the robot's motion trajectory according to the distance and direction deviating from the magnetic trajectory, thereby realizing the robot's motion navigation. 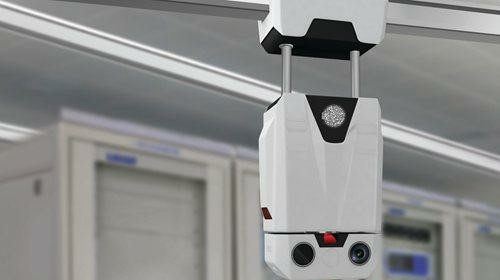 The visible light camera can adjust the focus and collect images clearly. The infrared thermal imaging detection part adopts an online thermal imaging camera, which has a video interface, an Ethernet control interface, and a DC power supply interface, and the power consumption is less than that to meet the requirements of the inspection robot for DC power supply and low power consumption. The pan-tilt can support horizontal rotation from to degree and vertical rotation from degree to degree, and it can capture and detect almost any angle of equipment.

The power management module is used to realize the charge and discharge control of the battery, the collection of battery voltage, current and power, and the protection of the battery. It also provides power for other modules. It is the heart of the entire robot system. In the system, the power management module mainly realizes the monitoring of the voltage, current, temperature and the action status of the relay when the robot is running. Through the serial port and the industrial computer control module in the form of master-slave question and answer to carry out information interaction, including the issuance of commands, information inquiries, and the execution of the issued commands.