Over the years with the progress of technology thermal imaging has managed to make leaps on ergonomics capitalizing on the progress of nanotechnology and lens engineering. As a result of sensitivity and design infrared thermal imaging has now gained a reasonable exposure over the last 20 years specifically in the potential that it holds in a clinical setting specifically for soft tissue screening.

Overall healthy people exhibit a bilateral symmetry in the distribution of heat with physical strain increasing mean temperature values. Usually cutaneous temperature differences do not exceed 0.25 °C, while those above 0.65 °C are constantly associated with pathology. Ankle injuries of over 200 patients indicated a minor injury that would resolve in 1–2 weeks when both legs showed isothermia (equal temperature) with the surrounding tissue. Unilateral hyperthermias ranged from 1 to 4 °C between the place of injury and the surrounding tissue; when this thermal asymmetry between the sprained ankle and the unaffected leg ranged from 1.5° to 2.0 °C rehabilitation took approximately four weeks. Recent studies have observed that ankle sprains show changes in temperature as a result of injury with temperature variation increasing based on the severity of damage. Tis increase in temperature was particularly profound when the affected ankle was compared to the non-affected site.

Figure 1. Infrared images before and after exercise indicating the temperature tendency of the population sample.

Thermal imaging can give a direct feedback on the physique of an athlete whether the user is a medic, a scientist, coaching personnel or even the same athlete. Moreover, infrared imaging provides an avenue for assessing the efficacy of treatment in regards to muscle soreness and further delivers a feedback on muscle fatigue countermeasures. Due to the non-technical and user-friendly nature of infrared methodology this assessment could be performed even by amateurs contrary to clinician, which could also acquire some more advanced knowledge of image segmentation to pinpoint specifically the origin of the ligament stretch or rupture.

By using thermal imaging one can gain insight into the type of injury, extent of damage, as well as recovery rate and rehabilitation. The non-invasive nature of the technique as well as the on-sight assessment can save athletes from longer rehabilitation times and further damage since athletes often wait for weeks or even months before they seek help for a sustained injury6. Due to perceptual bias athletes cannot pinpoint the direct source of physical pain but the specificity and sensitivity of the thermal imaging can direct the focus of the physician or therapist locally resolving the issue much faster. Regular screening of an athlete before and after an injury can help the coach or trainer adapt the load according to the pressure put on joints, ligaments and muscles thus always monitoring and avoiding injuries of overtraining as well as allowing enough recovery time prior to the next training session. 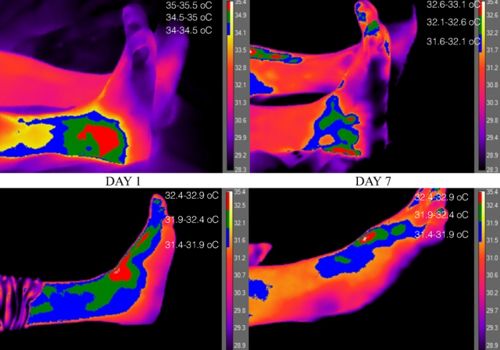 Since ankle sprains is one of the leading soft tissue injuries, the current study was set to examine the suitability of functional infrared thermal imaging in evaluating physiological alteration on the ankle as a result of exercise or injury. The current study consists of a case report of a patient with an ankle sprain and the behavior of temperature after a series of physiotherapy sessions. Twenty participants underwent a 30-minute treadmill run with pictures of their ankles being taken during rest and after exercise. It was observed that the temperature of the ankles of participants that underwent physical exercise rose on average by 2.4 °C after taking into account both the medial and lateral sides of the both ankles. In addition, the patient’s left ankle appeared to be 2.5 °C above the temperature of the non-affected right ankle. 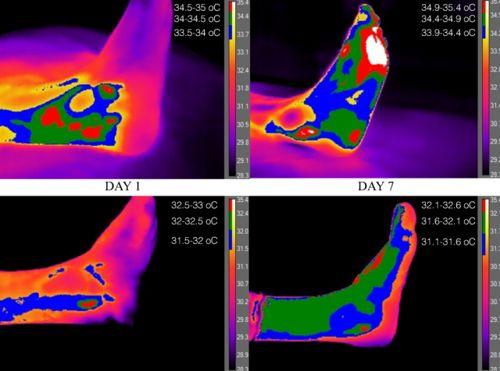 Trough the obtained result we have verified that thermal imaging is sensitive enough to delineate variability in temperature that is indicative of both pathology as well as tissue strain. Although exercise and injury may manifest in a similar thermal pattern, an ankle sprain manifests as a more concentrated focal heat patch covering a wider range of tissue in which thermal segmentation extends widely in the surrounding tissue. Thermal imaging provides a reliable tool for the screening of soft tissue strain and injury. The implemented method of analyses offers a suggested simple way not only in visualizing trauma but also physical strain.

Thermal imaging could be used as an adjacent tool in any environmental setting to assess the magnitude of soft tissue damage independent of common subjective assessment methods such as referred pain and biological movement restriction. Despite that this type of technique is still underdeveloped regarding sports medicine it could be used along side mainstream tools such as MRI to evaluate the level and rate of recovery providing a quantitative assessment of the level of therapy that the athlete receives.