This study aims, to highlight the feasibility and applicability of infrared thermography in swimming for the purpose of quantifying the influence of the swimming style on the cartographies of cutaneous temperatures of a swimmer. Whereas the infrared thermography is used under thermal conditions of living, no mention of its application to swimming is found in the literature.

The study was carried out in a swimming pool. The temperature of water in the pool is a significant parameter, which conditions the evolution of physiological parameters such as, for example, the production of lactate or the heart rate and which has a direct influence on the process of body thermoregulation. Swimming induces a complex thermoregulation process where part of heat is given off by the skin of a swimmer. As not all the heat produced can be entirely given off, there follows a muscular heating resulting in an increase in the cutaneous temperature. An analysis carried out by Robinson and Somers showed that in swimming, the optimal temperature of water for 20 minutes of freestyle must range between 21 and 33 °C, with an optimal breakeven point at 29 °C. Figure 1. Infrared cartographies of the upper and the lower limbs before effort.

The experimentation took place in a covered swimming pool of 25 m in length. The temperature of the water was 27 °C and that of the ambient air was 24 °C. The experimental protocol, is defined as follows: At the beginning, the swimmer is immersed up to the neck in the static position for 10 minutes. At the end of this period, the swimmer leaves water and then is rapidly dried (water is opaque to infrared radiation). The following task was the first recordings of the body surface thermal maps, that constitute the thermal reference level of the swimmer at rest. Next, the swimmer executes his first 100 m butterfly, leaves water, is dried and then is subjected to a second set of thermal acquisitions that will provide the cartography of the body surface temperatures after the exercise. After that, the swimmer is immersed in water again. The duration between two swimming series is sufficiently long (10 minutes) to allow a return to the thermal balance of the swimmer.

It is to be specified that the swimmer was subjected to a test during the period of recovery according to his training program, which explains the average results obtained during the test of a 4 × 100 m medley with a departure in water. 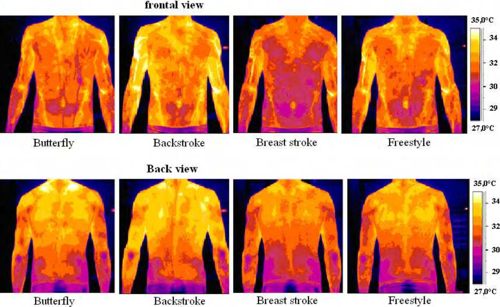 Figure 2. Infrared cartographies of the trunk and the upper limbs.

In order to better assess the influence of the swimming style on the muscular heating, the cutaneous surface was divided into closed polygonal surfaces A, B, ..., J. The limb extremities and the joint regions, which represent poorly the contribution of the body thermoregulation process, were excluded from this geometrical body cutting. Figure 1 presents infrared cartographies set at rest for the upper and lower limbs of the swimmer, after the swimmer had spent 10 minutes in the pool water at 27 ° C.  To quantify this distribution, let us introduce the histogram of the cutaneous temperature of the swimmer at rest shown in Figure 1. These temperatures constitute the case of reference of the study. There appear disparities in the distribution of the average temperatures of the zones; the highest temperatures correspond to the zones closest to the vital organs of the swimmer (abdomen, chest, back), whereas the lowest are those of the forearms of the swimmer. The maximum variation observed is about 1.7 °C. Figures 2 and 3 show the various infrared cartographies established for the four styles and for the upper and lower limbs of the swimmer, after the swimmer had spent 10 minutes in the pool water at 27 ° C. Notable differences appear in the images, which allows us to predict a considerable influence of the swimming style on the distributions of the cutaneous temperature. The average temperature difference (ΔT), defined as the difference between the temperature measured after effort and that measured at rest allows quantifying the influence of swimming style. The histograms indicate that a significant increase in the cutaneous temperature is possible in accordance with the swimming style and the body zone considered. Indeed, it appears that the highest temperature is reached in the upper part of the body corresponding to the backstroke with 2.50 ± 0.10 ≤ ΔT ≤ 4.55 ± 0.10, whereas corresponding to the lower limbs, it is the breast stroke that generates the greatest increments in the cutaneous temperature, with 1.25 ± 0.10 ≤ ΔT ≤ 2.05 ± 0.10. On the contrary, freestyle induces the weakest variations in temperature on the lower limbs, with 0.30 ± 0.10 ≤ ΔT ≤ 0.90 ± 0.10.