EN / 简
You are here: Home » News » Application—Infrared Thermography In The Detection Of Brown Adipose Tissue In Humans

Infrared Thermography In The Detection Of Brown Adipose Tissue In Humans

The recent years have seen a dramatic resurgence of interest in brown adipose tissue (BAT) in humans. Following the discovery of FDG-avid depots in the supraclavicular and neck regions of humans undergoing Positron Emission Tomography (PET)-CT scanning, investigations moved rapidly to histological confirmation of these depots as BAT and then to define its contribution to energy expenditure. Indeed, efforts have now turned to exploring BAT as a novel therapeutic target in human metabolic disease.

Currently, PET-CT is the gold standard method for the detection of BAT. However, PET-CT has a number of limitations, including cost, radiation exposure, and duration of the procedure. Diagnostic PET-CT scans expose substantial radiation to the subject. While radiation exposure can be minimized in scans performed for research purposes, it will continue to limit the use of PET-CT particularly for healthy volunteers. Furthermore, the reproducibility of PET-CT imaging is poor because of the susceptibility to changes and differences in scanning temperature and seasonal variations in temperature. Therefore, there is a need to develop other methods to investigate BAT physiology.

Because of the thermogenic properties of BAT, thermal imaging is a potential method for detecting BAT and studying its function. Using infrared thermography (IRT), we have previously reported a significantly higher skin temperature in the region overlying the supraclavicular (SCV) fossa than the mediastinal (MED) region in 87 individuals. In one subject, this temperature difference became more pronounced following a meal ingestion and cold exposure, both known stimulants of BAT activity. Temperature increases within the supraclavicular region in response to cold exposure have also been confirmed with thermography in a recent study. The aim of this study was to assess the accuracy of IRT to predict the presence of BAT as benchmarked against PET-CT imaging specifically to establish reproducibility, sensitivity, and specificity. 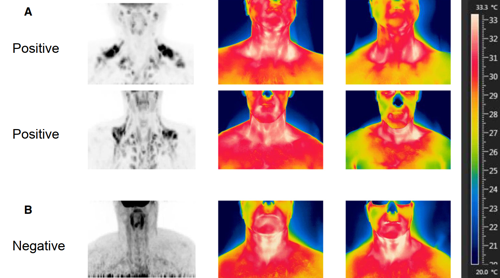 Figure 1. Representative PET-CT and thermography images before and after 120-min cooling for (A) two BAT-positive subjects and (B) one BAT-negative subject.

IRT has several advantages. The procedure is convenient as it can be undertaken within minutes, unlike PET-CT which requires a postinjection and scanning time of at least 2 h. Importantly, there is no radiation exposure with IRT, whereas for PET-CT using a standard FDG dose, the radiation from a single study for oncological indications far exceeds radiation safety limits for investigative studies in normal subjects. Another useful application for IRT is in the monitoring of changes in BAT activity over minutes or hours that cannot be done with PET-CT, which is restricted to a single time domain of capture over 1 h. In that regard, IRT offers considerable advantages as a safer and more flexible tool for studying BAT function and activity.

IRT conferred a probability of greater than 80% in predicting BAT. While promising, we caution against using IRT independent of PET-CT imaging until more evaluations are published. At this stage, we propose that it serves as a screening tool for selecting subjects for regulatory studies of BAT function in whom the presence of significant BAT activity is initially confirmed by PET-CT imaging. A baseline of PET positivity brings specificity to the interpretation of changes in temperature difference between the neck and chest as changes in BAT activity.

This is the first study investigating the utility of IRT for detecting BAT referenced to PET-CT. Our evaluation provides strong evidence that IRT is a promising noninvasive technique for the detection of BAT in the SCV region. The discriminant measure is the difference in skin temperatures between the SCV and the lateral chest areas, and not the temperature overlying the SCV fossa after cold stimulation. The predictive value of the temperature difference is better on the left than on the right. IRT is a useful technology that may complement PET-CT imaging in the study of BAT in humans.