Free tissue transfer has become a reliable and well-established technique in reconstructive surgery. Success rates varying between 91% and 99%, with reexploration rates varying between 6% and 25% having been reported. Failure of free flaps has been reported to occur on the operating table during completion of the operation, rather than during the postoperative course. As a result, several authors have stressed the importance of intraoperative monitoring of free flaps. It is especially the period immediately after completion of the microsurgical anastomosis, as well as the period during inset and closure of the flap incisions, that is considered important to monitor. Any method that will rapidly identify reperfusion problems in free flaps will increase the likelihood that flap salvage is possible. This rapidity is accomplished by clinical assessment, objective data being provided by the monitoring technique, or a combination of both. 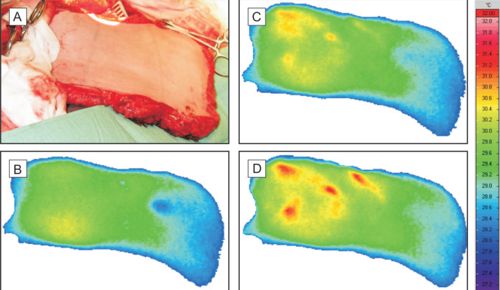 Clinical monitoring of flaps relies on skin color, capillary refill, and turgor to provide visual evidence of flap perfusion. Recognizing the visual cues of a failing flap early enough to successfully salvage the tissue requires considerable clinical experience. IR thermography is widely used in clinical medicine as a noninvasive technique to measure skin temperature. This study evaluates intraoperative dynamic IR thermography as a novel method to indirectly monitor flap reperfusion during breast reconstruction with the deep inferior epigastric artery perforator (DIEP) flap and the superficial inferior epigastric artery (SIEA) flap. The rate and pattern of rewarming after the cold challenge during primary ischemia and after a cold challenge at the end of the operation were investigated. 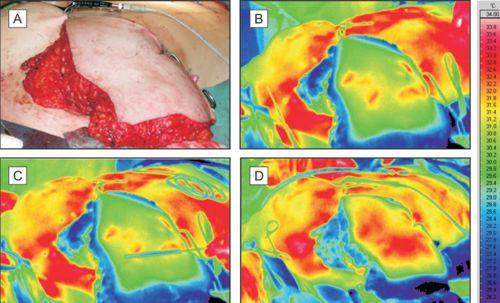 Figure 2. A, Digital photograph of a DIEP flap. B and C show infrared thermal images of the same flap after successful microsurgical anastomosis.

The intraoperative use of dynamic IR thermography registered successful arterial inflow, as well as partial and total obstruction of arterial inflow. It is especially the former which may be clinically difficult to detect. The dynamic infrared image sequences showed an improved rate and pattern of rewarming of the flap after an additional venous anastomosis was opened. The state of reperfusion of the flap at the end of the operation could easily be determined. Such information may be vital for flap survival. In this study, dynamic IR thermography was used on skin flaps, but it is likely that this technique will be useful to monitor other types of flaps as well. Although further research is necessary, dynamic IR thermography appears to be a valuable method for intraoperative monitoring of free tissue transfer. Dynamic infrared thermography provides the surgeon with valuable information on flap reperfusion during free flap surgery.