There has been a renewed interest in the potential of brown adipose tissue (BAT) as a therapeutic target to improve metabolic health, especially after confirmation of its presence in adult humans. Brown adipocytes are uniquely thermogenic due to their expression of uncoupling protein which is activated by cold, enhances energy expenditure and produces heat. Retrospective studies indicate that BAT is located primarily in the supraclavicular (SCV) and cervical areas in adult humans. There is a lower likelihood of detecting BAT in humans with Type 2 diabetes. Furthermore, 10 days of cold exposure increased insulin sensitivity in adults with Type 2 diabetes, supporting the suggestion that manipulation of BAT may be a potentially important treatment for obesity and type 2 diabetes. This makes it increasingly important to assess the activity and mass of BAT in humans.

Although F-FDG PET–CT is considered the gold standard in the measurement of BAT, its high cost and radiation hazards prohibit widespread use in performing repeated scans or studying pediatric or pregnant populations. Furthermore, since BAT also utilizes both free fatty acids and triglycerides, changes in F-FDG PET may not be fully reflective of alterations in BAT metabolic activity. Given these limitations of F-FDG PET–CT, it is important to develop noninvasive, safe and relatively inexpensive methods to assess BAT metabolic activity. 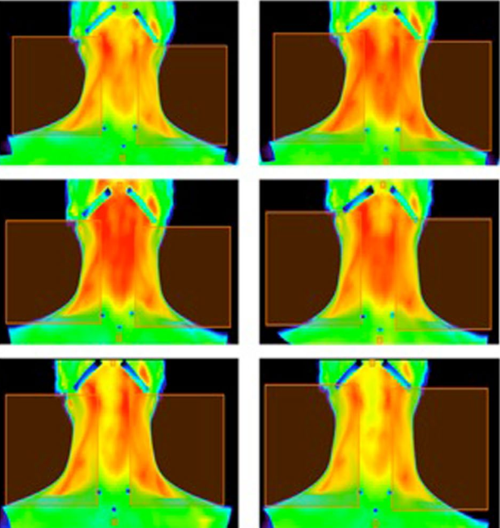 In Phase 1, we compared the thermal response to 12 °C cold after acclimation at either 32 °C or room temperature using thermographic imaging. Repeatability of the 32 °C acclimation trial was studied in a second group in Phase 2. Phase 1 included 28 men and Phase 2 included 14 men. The thermal response was greater after 32 °C than after room temperature acclimation, was not related to outdoor temperature, did not correlate with supraclavicular fat measured with dualenergy x-ray absorptiometry and was repeatable. Acclimation at 32 °C followed by cold generates a reproducible change in supraclavicular skin temperature measurable by thermal imaging that may be indicative of BAT metabolic activity.

In conclusion, these data suggest that acclimation at 32 °C followed by 12 °C cold generates a significant and reproducible change in SCV skin temperature that may be indicative of BAT metabolic activity in adult humans. Furthermore, BAT detection with the 32 °C-cold protocol using infrared thermography is unlikely to be affected by environmental temperature and subcutaneous neck fat. Safe measurement of BAT in humans will aid the investigation of this novel tissue for the treatment of metabolic disorders.