Since 1995, successive dome collapses have occurred on the volcano of Montserrat, leading to the evacuation of the capital Plymouth and surrounding areas and eventually being abandoned. In 1994, the Merapi volcano (Indonesia) collapsed, killing 95 people and destroying them A few villages. A similar incident in Volcánde Colima in 2015 produced a volcanic debris flow of about 10 km, which luckily caused only minimal damage. Lava domes can cause major volcanic disasters because they are prone to generate volcanic debris flows related to collapse, and volcanoes continuously show small volcanic eruptions on the order of hours. These usually explode after the volcanic dome is placed.

Monitoring the geometry, growth rate and deformation of the dome is the key to predicting such collapse events. Increasingly, photogrammetry is being considered for use. These techniques can safely and cheaply acquire morphological and geometric data and use them to track eruption progress, identify signs of instability or changes in water retention rates, and predict changes in volcanic risk. However, these methods rely on clear observation conditions, thus increasing the difficulty of monitoring for degassing, cloudy clouds, and poor lighting conditions. 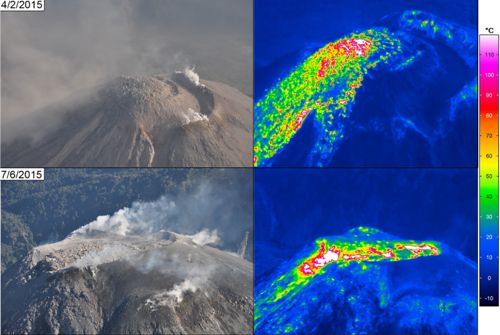 Thermal imaging techniques are also widely used for monitoring purposes because they can quantitatively assess the heat flux, dome, flow rate and jet holes of volcanic vents. Importantly, the spatial distribution of heat flux can reveal features that are difficult to detect with reflected visible light, such as blowholes, cracks, and falling stone marks. Changes in the distribution and intensity of thermal anomalies can also precede changes in volcanic eruptions or eruption patterns, so it is possible to predict disasters.

The researchers monitored the dome of the volcano that began in January 2013, when the lava erupted to form a 150 mm wide and 50 mm deep crater bottom (a few big explosions occurred in the same month). The new dome continued to fill the crater. By April 2013, the overflow formed several lava flows and eventually filled the entire mountaintop crater (about 300m wide). From July 10 to 11, 2015, several local collapses (with increased volcanic activity) resulted in the destruction of the dome; the volcanic debris density flow generated by these collapses spread along the Montgrande ravine for about 10.6 kilometers, threatening several Home Ranch and Quesaria Town (population 8611 in 2010). Since 1913, the volcanic eruption is the largest volcanic eruption in Volcan de Colima. The picture shows the selected SLR and thermographic measurement models

The researchers demonstrated a method that uses motion structure technology to directly obtain topographic data and georeferenced heat maps from tilted thermal images, as well as Volcánde Colima, Mexico, from 2013 to 2015. ) Images captured during the growth of the dome. The thermal model provides intuitive dome surface temperature and geographic reference as well as important measurements of geometry.

This study further demonstrates that despite the low spatial resolution of thermal images, thermal models can be monitored during periods of insufficient light and large amounts of degassing. And the estimated value of the volume of the lava dome has a good correspondence between the SLR and the heat data set. Successfully used structural motion techniques and tilted thermal images to generate a time series of georeferenced 3D thermal models of the Volcan de Colima active lava dome.

The thermal model provides useful complementary geometric estimates, helps to identify uncertainties in the model, and provides a geographic reference map of the temperature distribution, so that the thermal activity area on the dome surface can be determined, so that the temperature distribution can be predicted in advance Assess the risk of dome collapse.