The erosion process in the rock mass depends on the characteristics and brittle structure of the intact rock, such as joints and other discontinuities. In the steep bedrock landscape, falling rocks are the main process to adjust the overall erosion rate. In some terrains (especially granite), rock collapses are usually formed by falling off fake rock blocks formed along the surface with parallel cracks. These cracks are called lamella cracks. The peeling sheet is usually connected to the rock through a so-called "rock bridge", where the sheet joints have not yet spread.

Recent work has begun to explore the role of rock bridges in determining various rockfall and landslide failure modes. These studies clearly show that the spatial distribution of rock bridges is essential for understanding the stability of jointed rock masses. People have recognized the importance of rock bridge and stepped path geometry for slope stability analysis. In recent years, techniques for drawing rock bridges on images and textured 3D point clouds have been significantly improved. However, these post-rockfall mapping methods are affected by exposure bias depending on the accessibility and visibility of the outcrop. A recent study proposed to work directly before the rock-fall event to combine the observations of remote sensing and field mapping studies to draw a complete rock bridge. And so far, the actual complete rock bridge has not been tested remotely. 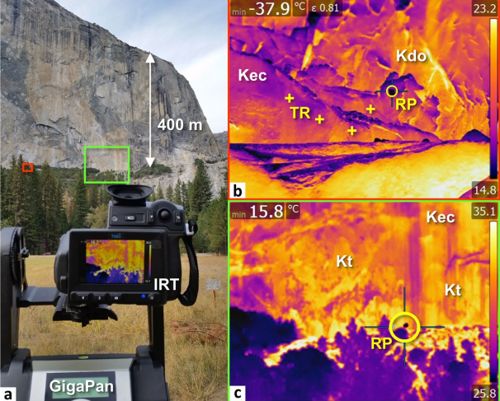 To meet this demand, the Institute of Earth Sciences at the University of Lausanne, Switzerland, combined infrared thermal imaging technology with ground-based laser scanning technology to remotely inspect the complete rock bridge southeast of El Capitan in the Yosemite Valley (California, USA). Four hours of infrared thermal monitoring was carried out on a 1,000-meter high cliff. The temperature has been calibrated at the temperature and corrected for emissivity effects. Thermal anomalies appearing on the surface of the two delaminated flakes are interpreted as signs of the presence of a rock bridge, and an estimate of the possible size of the rock bridge is derived, which is then used to evaluate the stability of the two monitored peeled flakes Sexual conditions.

The infrared thermal panorama shows the hot and cold characteristics of the surface of the two granite peeling plates, which is consistent with the expectation of the back of the plate that is partially separated by the air circulation cooling. Scientists found that the two monitored fake rock blocks were always cooler than the surrounding walls. This colder heat signal was interpreted as the result of air circulation that wrapped and cooled the separated parts. Even during rock cooling at night, there is still a small range of thermal abnormal temperatures on these same surfaces. The rock attachment through the rock bridge may be the cause of the unusually warm thermal data. Based on the combined imaging of thermal laser and ground laser radar, and using geometric and rock fracture mechanics analysis, the stability of the two plates can be quantified. The analysis shows that the thermal imaging technology can remotely detect the complete rock bridge, thereby greatly improving the risk assessment of falling rocks.