EN / 简
You are here: Home » News » Application—The Influence of Breaststroke Swimming on The Muscle Activity of Young Men in Thermographic Imaging

Measuring energetic-metabolic activity of certain muscles or muscle groups presents a significant technical problem. Current methods of judging the rate of aerometabolic muscular activity during human motion are based on analysing exhaled air and calculating oxygen intake. However, this method of indirect calorimetry provides information on total body energetic requirements only. A very good method to measure individual muscle activity is electromyography. This method provides information on electric muscular activity which is prior to metabolic activity itself.

Mechanical effectiveness of human muscular work is about 50%. Large amounts of chemical energy in muscles are transformed into heat during muscle contractions. Higher working metabolic activity and perfusion of muscle tissue result in a significant increase in muscular temperature. Heat energy is then transferred to close adjacent tissues including skin through fluids flowing in vessels. 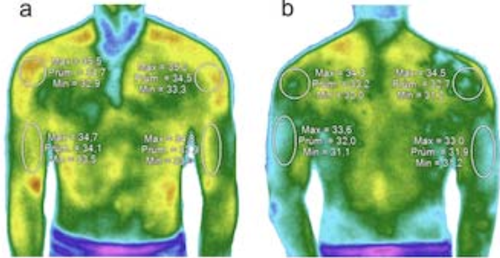 Figure 1. Examples of thermograms with selected muscle areas: Before swimming.

Thermography displays heat energy radiation from the body. Subsequently, temperature of selected points or areas of skin surface is calculated. Displaying increased metabolic muscular activity via thermography is used in sports medicine while diagnosing myositis caused by overload. A number of authors have described heat changes in the body surface during human physical activity outside water.

The aim of this work is to describe and assess energetic-metabolic activity of selected muscles of upper extremities and body during breaststroke swimming through infrared thermography. Thermograms were taken of 25 students and 15 minutes after swimming 1,000 m focused on 20 regions of interest, i.e., corresponding to selected agonists and synergists in upper extremities and body. It was found that there is a significant increase 15 minutes after swimming in triceps brachii, and in side, rear and front parts of the deltoid muscles. On the contrary, there was a significant relative decrease in temperature in pectoralis, rhombic and lower trapezius, erector spinae lumbalis and latissimus dorsi. It can be concluded that swimming 1,000 m breaststroke affected significant increase in the temperature of regions of interest, i.e., corresponding to agonists and synergists of upper extremities for the swimmer’s forward motion. A relative decrease in temperature occurred rather in body muscles. The problem of biased results due to water cooling was solved by using thermograms taken only in the 15th minute after getting out of water and calculating relative temperatures with normalized units. 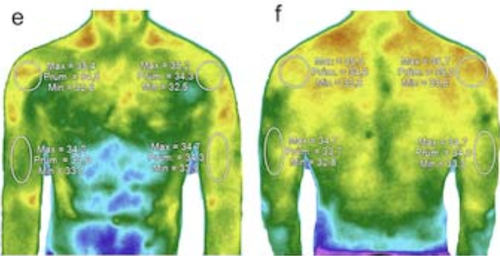 Our results have contributed to the knowledge of temperature changes in skin which occur due to working activity of the muscles during breaststroke swimming in university students: In examined group of persons, we have declined normal distribution of temperature in 50% of muscle areas of upper extremities and body. In nearly all areas, the right–left difference in temperatures is not significant. As a result of breaststroke swimming, there was the most radical increase in temperature in the area of arm triceps – agonists of the swimmer’s forward motion.