Infrared thermal imaging technology is composed of optical lens, internal control circuit, signal transmission circuit, eyepiece and other modules, and the core is infrared detector. When working from the focal plane, the temperature can be divided into two categories: refrigerated detectors and uncooled detectors. From the packaging, there are several categories such as amorphous silicon, vanadium oxide, and metal packaging. Most of the domestic detectors currently used in mass production are oxidized sail detectors, but some high-end product detectors still need to be imported from abroad, but with the development of domestic technology, it is believed that this phenomenon can be eliminated in the future.

In practical applications, unrefrigerated detectors are more suitable for mass production and civilian use, while refrigerated detectors are more sophisticated, but the cost is also more expensive. At present, there is still a certain gap between domestic infrared instruments and foreign countries, and the hardware, circuits, and core detector technology need to be improved. 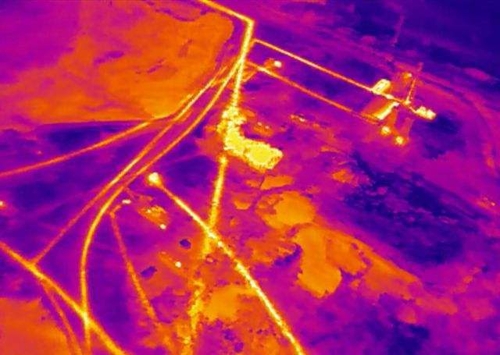 In the traditional measurement methods in the past, the measurement of large quantities of objects to be tested will result in a lot of waste of manpower and time, and the gains outweigh the losses. The problem still exists is that the surface contact between the measuring instrument and the measured object destroys the original temperature field of the object, affects the transmission of the temperature sensing element, and causes the output signal to be not accurate enough. The measurement of infrared thermal imaging technology will not interfere with the temperature of the measured object, there is no inertial effect in the transmission of optical information, and the path can be changed smoothly to ensure the integrity of the data. Thermal imaging technology has initially entered the field of measurement, and through various tests on the temperature field, it provides effective data for understanding heat transmission.    The research of thermal imaging technology has made significant contributions to exploring new physical concepts and building new physical models, and provides new ideas for solving some problems.

German scientist Hoxel discovered the existence of infrared light in 1800. In 1900, German physicist Planck proposed quantum theory, which laid the foundation for the development and improvement of infrared thermal imaging technology. Infrared thermal imaging technology has experienced two world wars and played an important role in the wars. In the first war, an infrared imaging device developed by Texas Instruments was called an infrared forward-looking system (FLIR).

The early thermal imaging system used an optical system to scan the thermal radiation of the measured target, which was received by a unit photon detector, and after a series of image processing and photoelectric information conversion, it output video and image signals, but it could not record in real time. With the rapid development of indium-germanium-doped photon detectors in the middle of the twentieth century, a real-time display system that can scan target thermal images at high speeds emerged in this period. With the development of real-time thermal imaging technology for high-speed scanning targets, AGA of Sweden has successfully developed a new thermal imaging instrument, which adds a temperature measurement function to the infrared imaging system. This is the earliest infrared thermal imaging instrument.

At the end of the 1980s, the developed thermal imaging cameras had more comprehensive functions. With the functions of measuring temperature, collecting image information, modifying, analyzing and storing, the weight is greatly reduced, and the accuracy and reliability are also significantly improved. In the mid-1990s, the American FSI company successfully developed from military technology to civilian use, and a new generation of infrared focal plane infrared imager (FPA) began to commercialize. When measuring, you only need to pay attention to the image of the measured object, save the image data to complete the operation. For some infrared handheld products with storage function, when you encounter an image you want to keep during outdoor observation, you can save the image by just pressing the camera button, and then you can export it from the computer, flush or print it, which is very convenient and quick .

From the end of the last century to the beginning of the new century, China has made great progress in the field of infrared thermal imaging. The core detectors of infrared thermal imaging can be produced independently, and infrared products are gradually approaching the homes of ordinary Chinese people. Although infrared technology started late, with our unremitting efforts, the technical indicators have reached the world's advanced level, breaking the foreign monopoly. At present, infrared thermal imaging technology has shown its brilliance in various fields such as environmental protection, medical treatment, and security, and has begun to occupy a place in the development of the world economy.

In nature, as long as the temperature of a substance is higher than zero, there will be energy conversion within it, and radiation will be generated externally. The optical lens performs the first screening, and the screening is completed for information processing, so that the human eye can intuitively distinguish the temperature map. The human eye can distinguish the wavelength of light from 400 to 760nm, and the human eye cannot distinguish wavelengths less than 400nm and more than 760nm. Thermal imaging technology uses infrared rays, which are not received by human eyes but can generate images that can be viewed by human eyes through algorithms and photoelectric conversion.

There are many steps for a sighting instrument to reach the user. From the initial detector selection, the software engineer designs the circuit, and the structural engineer designs the structure and appearance. After the R&D prototype is produced, there is a project for testing, and the engineering prototype is produced, and then put into production. After the assembly is completed, it is necessary to simulate the conditions used by the user, collect a local area for the detector, perform data collection under various conditions of low temperature, room temperature, and high temperature, and perform non-uniform correction, and correct the coordinates of abnormal pixels in the imaging with algorithms. A series of reliability tests. In addition, general electronic components and infrared technology have instability, and the number of originals constituting the device is large, which requires professional knowledge in various aspects. Although strict quality control has been made for each accessory, the more accessories, the greater the probability of error. Therefore, infrared products need to make a longer quality guarantee period and after-sales service to ensure the user experience.

Infrared thermal imaging technology uses optical lens screening to feed back the radiant energy of the identifiable wave to the detector. The infrared detector goes through a series of processing and sends the collected information to the part responsible for image processing inside the machine for secondary processing. The image processing part integrates and analyzes the data information collected from the detector. After processing, the image can be seen through the eyepiece or standard video monitor or LCD screen. The infrared thermal imager converts the collected radiation information into a temperature map that is easy to observe and recognize. The temperature value of each point can be obtained from the image. This is also the basic working principle of the instrument used during the SARS period. Real-time monitoring of a large area, normal temperature imaging shows normal, special marking for temperature exceeding the standard, only a small amount of manpower can complete a station or port detection.