Thyroid hormone affects energy metabolism, body temperature, and cardiovascular function. This is evident in hypo- and hyperthyroid patients, who display metabolic and cardiovascular problems as well as inadequacies in heat and cold tolerance. The latter effects are thought to be a consequence of a shift in obligatory thermogenesis, because thyroid hormone affects basal metabolic rate through the regulation of genes controlling cellular metabolism and mitochondrial function.

In addition, facultative thermogenesis, brought about by shivering and brown adipose tissue (BAT) activation, is also modulated by thyroid hormone. The recent discovery of BAT in adult humans, where previously thought to exist only in rodents and neonates, suggests that the role of BAT in thermoregulation and energy expenditure may be underestimated. Recently, a new role of thyroid hormone in facultative thermogenesis has emerged, controlling BAT via the central nervous system. The importance of central thyroid hormone receptor α1 (TRα1) signaling for BAT activity was further supported by findings in mice heterozygous for a R384C mutation in TRα1 (TRα1+m), which display a strong hypermetabolism as the result of a central overactivation of BAT. However, the finding was unexpected, as the specific mutation causes a 10-fold reduced affinity to 3,3′,5-triiodothyronine (T3), and lower brown fat thermogenesis would be expected from impaired TRα1 signaling. Even more surprisingly, when TRα1+m mice were treated with supraphysiological doses of T3 to reactivate the mutant TRα1, their BAT activity returned to normal levels, although T3 is known to stimulate thermogenesis. This puzzling phenotype of TRα1+m animals therefore prompted us to investigate their thermoregulation in greater detail.

Figure 1. Infrared thermography was used to quantify heat generation from the interscapular brown fat depot (*P < 0.05) and heat dissipation from the tail.

Here we demonstrate that TRα1+m mice display lower nocturnal body temperature despite BAT hyperactivity. Studying the tail as an important thermoregulatory effector organ, we reveal a defective vascular control of heat dissipation and conservation in vivo and identify possible vascular mechanisms affected by the impaired TRα1 signaling in ex vivo studies. Our findings show that the BAT hyperactivity observed in TRα1+m mice is a consequence of impaired vasoconstriction causing increased heat loss. The results describe a previously unknown role for TRα1 in vascular control of thermoregulation, thus constituting a unique link between thyroid hormone signaling and facultative thermogenesis. Moreover, they provide a possible explanation for the exaggerated thermosensitivity observed in patients with defects in thyroid hormone metabolism. 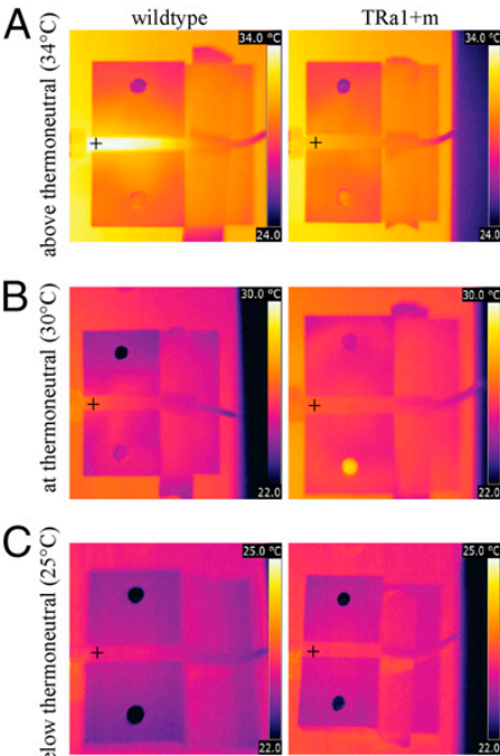 Here we show, using isolated tail arteries, that defective thyroid hormone receptor α1 signaling impairs acetylcholine-mediated vascular relaxation as well as phenylephrine-induced vasoconstriction. Using infrared thermography on conscious animals, we demonstrate that these defects severely interfere with appropriate peripheral heat conservation and dissipation, which in turn leads to compensatory alterations in brown fat activity. Consequently, when the vasoconstrictive defect in mice heterozygous for a point mutation in thyroid hormone receptor α1 was reversed with the selective α1-adrenergic agonist midodrine, the inappropriate heat loss over their tail surface was reduced, normalizing brown fat activity and energy expenditure. Our analyses demonstrate that thyroid hormone plays a key role in vascular heat conservation and dissipation processes, adding a unique aspect to its well-documented functions in thermoregulation. The data thus facilitate understanding of temperature hypersensitivity in patients with thyroid disorders. Moreover, the previously unrecognized connection between cardiovascular regulation and metabolic activity revealed in this study challenges the interpretation of several experimental paradigms and questions some of the currently derived hypotheses on the role of thyroid hormone in thermogenesis. 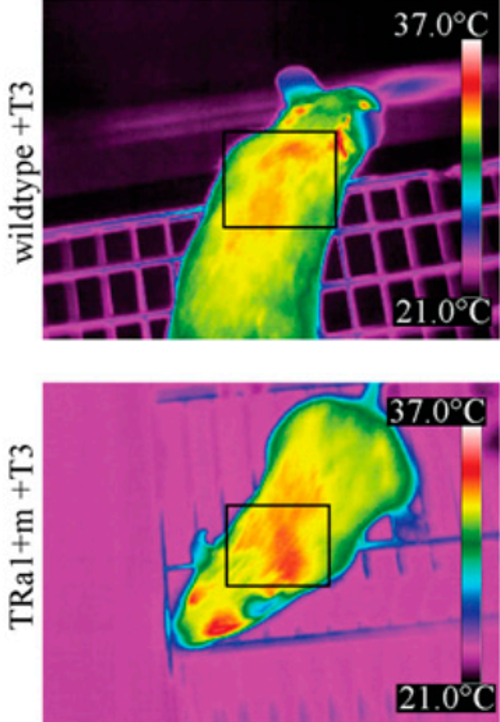 Figure 3. Likewise there was no significant difference in BAT temperature between WT and TRα1+m mice after T3 treatment.

Our data identify a unique role of TRα1 signaling in the regulation of body temperature and solve the apparent paradox of unexpected increased brown fat thermogenesis in an animal model reflecting receptor-mediated hypothyroidism. We confirm the previously described BAT hyperactivity in TRα1+m mice, using infrared thermography, but also demonstrate that this is likely a secondary consequence of impaired vascular regulation: The relative insensitivity of the tail artery to the adrenergic constriction signal leads to increased heat loss over the surface, thus lowering body temperature and causing a compensatory increase in brown fat thermogenesis. The relative normalization of body temperature during daytime is also explained by this mechanism, as the inactive mice are curled up in their nest and the surface is less exposed, thus reducing heat dissipation.

Given the overall importance of thyroid hormone in the control of cardiovascular function, it was not surprising that TRα1+m mice displayed intrinsic vascular defects. Several other studies previously demonstrated that arterial compliance is strongly affected by thyroid hormone and that TRα1 is important for vascular smooth muscle function, whereas capillary density is controlled by TRβ. However, using the temporal reactivation of TRα1 signaling in our animal model, we obtained interesting unique insight: Although the promoting effects of T3 on NO-mediated relaxation of vasculature in wild-type mice were observed as expected, nonreversible alterations in NO-mediated relaxation and the purinergic component of contraction were surprisingly noted in the TRα1+m mice. These irreversible defects were not a consequence of impaired nongenomic TRα1 signaling in the mutants, because no differences were observed in the expression of the PI3-kinase target genes catalase and cyclin G2; however, whether they could indicate an important role for TRα1 during vascular development remains to be elucidated.