Exhibiting a mobility that can exceed 200,000 cm2/Vs and a thermal conductivity that can reach 2,000 W/mK, graphene is extremely efficient at transporting energy. Because of this efficiency, graphene continues to be pursued for numerous microelectronic and optoelectronic applications. Regardless of its final employment, common to each pursuit is the practical necessity of interfacing this two-dimensional material (2D) into a three-dimensional (3D) world at a scale practical for application. Graphene synthesized using chemical vapor deposition (CVD) atop copper, for instance, can be obtained at near wafer scale (i.e., ~2 in.) from multiple vendors. Epitaxial (Epi) graphene realized via the sublimation of silicon (Si) from silicon carbide (SiC) is limited only by the size of the supporting substrate. 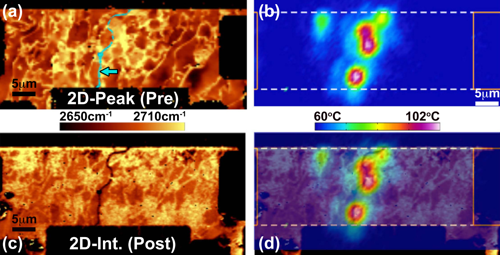 Solely from the perspective of thermal resistance then, epitaxial graphene provides an avenue to minimize self-heating and maximize power dissipation. Silicon carbide has a thermal conductivity ~3x that of silicon at room temperature. Furthermore, since epitaxial graphene is synthesized directly atop the SiC, there is no thermally insulative dielectric layer (e.g., SiO2) separating the graphene from the more thermally conductive substrate. While transfer of CVD graphene to SiC can capitalize upon the high thermal conductivity of the substrate, weak van der Waals bonding will result in a comparatively large thermal resistance at the interface. 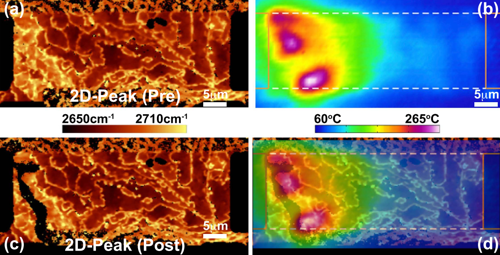 Self-heating is not determined exclusively from the thermal resistance, however, but also the area over which heat is generated. Factors localizing heat generation will exacerbate its eﬀect. Self-heating induced failure of graphene devices synthesized from both chemical vapor deposition (CVD) and epitaxial means is compared using a combination of infrared thermography and Raman imaging. Here, we demonstrate that morphological imperfections localizing heat generation in a graphene device ultimately determine its power handling capability. Specifically, the breakdown power of epitaxial graphene on SiC devices is shown to be <3x that of comparable devices made up of CVD graphene atop a similar substrate. Correlations between the temperature distribution obtained with infrared–(IR) thermography and the morphology acquired using Raman imaging indicate that the diﬀerence arises from heat localization stemming from morphological features characteristic of the synthesis process. Altogether, the results demonstrate that the morphology of the graphene, rather than the system’s thermal resistance, dictates the amount of power that it can sustain.