EN / 简
You are here: Home » News » Scientific Research—Use of A Portable Thermal Imaging Unit As A Rapid, Quantitative Method of Evaluating Inflammation And Experimental Arthritis

Scientific Research—Use of A Portable Thermal Imaging Unit As A Rapid, Quantitative Method of Evaluating Inflammation And Experimental Arthritis

Use of A Portable Thermal Imaging Unit As A Rapid, Quantitative Method of Evaluating Inflammation And Experimental Arthritis

Inflammation is a complex process characterized by swelling, redness, warmth (fever), and pain. It is the body's natural response to injury and plays an important role in healing and the fighting of infection. While essential for host defense and repair, the inflammatory response may have also been implicated in a myriad of disease including arthritis (rheumatoid/osteoarthritis), dermatological conditions and a number of cardiac/pulmonary pathologies. The inflammatory response therefore, represents an attractive pathway for pharmacologic intervention and, as a result, received a great deal of attention for the development of therapeutic agents designed to inhibit this process.

Drug discovery efforts rely, in part, on the use of preclinical animal models that seek to directly mimic the disease itself or certain patholophysiologic aspects of the disease. In the setting of inflammation, many of the animal models are dependent on a number of endpoints including the measurement of tissue swelling, determination of inflammatory cell numbers, measurements of cytokine levels and histopathological analysis. These analyses however are, to a degree, labor- and timeintensive. As drug discovery efforts in inflammation biology accelerate, there will likely be a concomitant need for the development of additional methods by which to determine the degree of inflammation in a rapid, reproducible manner. Thermal imaging may therefore represent an important adjunct methodology for the identification of anti-inflammatory agents.

Objects including living tissues emit infrared radiation as a function of their temperature. Thus, the higher the temperature the more infrared energy is emitted. Thermal imagers act to detect/visualize thermal radiation and convert these signals into the corresponding temperatures distribution. Since alteration of temperature is a fundamental physical property of inflammation and associated diseases, it is hypothesized that infrared thermal imaging (thermography) may provide a sensitive, non-invasive methodology by which to determine disease severity both in animals models as well as in the clinical setting. 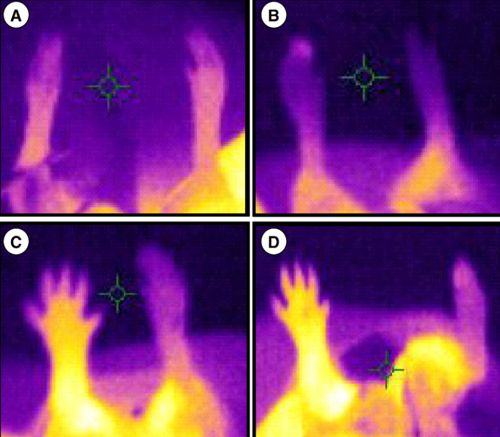 Figure 1. Representative thermal images of animals imaged at baseline (A), 1 (B), 2 (C) and 4 (D) hours post-carrageenan.

The present study describes the characterization of a hand-held thermal imaging device in a preclinical model of general inflammation and a model of rheumatoid arthritis (RA). A hand-held ThermoView Ti30 portable thermal imager was utilized to detect the temporal changes in thermal signatures in rat model of carrageenan-induced paw edema (CFE) and a model of collagen-induced arthritis (CIA). In both in vivo models, the kinetics of the thermal changes were correlated to footpad swelling. In the rat CIA model, increases in footpad temperature, as determined by thermal imaging, were significantly elevated by Day 11 and remained elevated throughout the duration of the 28 days protocol. Thermal changes were also found to precede increases in footpad edema (swelling). The results of this study demonstrate that the hand-held thermal imaging technology represents a rapid, highly-reproducible method by which to quantitate the degree of inflammation in rat models of general inflammation and rheumatoid arthritis. The ability to detect pharmocodynamic responses in paw temperature suggests that this technology may be a useful tool for the development of pharmacologic interventions for the treatment inflammation-related pathologies.