Infrared thermal imaging technology is composed of optical lens, internal control circuit, signal transmission circuit, eyepiece and other modules, and the core is infrared detector. When working from the focal plane, the temperature can be divided into two categories: refrigerated detectors and uncooled detectors. From the packaging, there are several categories such as amorphous silicon, vanadium oxide, and metal packaging. Most of the domestic detectors currently used in mass production are oxidation sail detectors, but some high-end product detectors still need to be imported from abroad, but with the development of domestic technology, it is believed that this phenomenon can be eliminated in the future. In practical applications, unrefrigerated detectors are more suitable for mass production and civilian use, while refrigerated detectors are more sophisticated, but the cost is also more expensive. At present, there is still a certain gap between domestic infrared instruments and foreign countries, and the hardware, circuits, and core detector technology need to be improved. 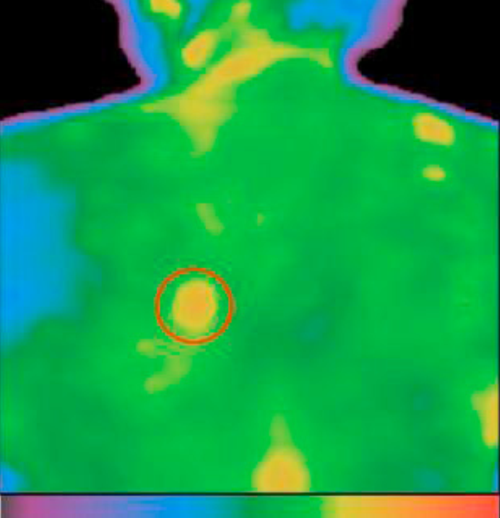 When the temperature of the object is higher than minus 273 degrees, it will radiate energy to the outside world. The higher the energy of the object itself, the more energy it radiates and the greater the impact on the outside world. When an object is heated, it will produce infrared radiation. In addition to temperature, the infrared radiation intensity is also related to factors such as the emissivity of the heating object and the nature of the surface condition of the object. According to Planck's law, the thermal field is measured by the infrared radiation principle of the object itself. The detector at the core of infrared technology collects and organizes the temperature information of each point of the measured object, analyzes and merges it inside the instrument, and obtains a heat distribution map.

There are many steps for a sighting instrument to reach the user. From the initial detector selection, the software engineer designs the circuit, and the structural engineer designs the structure and appearance. After the R&D prototype is produced, there is a project for testing, and the engineering prototype is produced, and then put into production. After the assembly is completed, it is necessary to simulate the conditions used by the user, collect a local area for the detector, perform data collection under various conditions of low temperature, room temperature, and high temperature, and perform non-uniform correction, and correct the coordinates of abnormal pixels in the imaging with algorithms. A series of reliability tests. In addition, general electronic components and infrared technology have instability, and the number of originals constituting the device is large, which requires professional knowledge in various aspects. Although strict quality control has been made for each accessory, the more accessories, the greater the probability of error. Therefore, infrared products need to make a longer quality guarantee period and after-sales service to ensure the user experience.

The working principle of the infrared thermal imager uses the optical lens to filter, and the radiation energy of the identifiable wave is fed back to the detector. The infrared detector goes through a series of processing and sends the collected information to the part responsible for image processing inside the machine for secondary processing. The image processing part integrates and analyzes the data information collected from the detector. After processing, the image can be seen through the eyepiece or standard video monitor or LCD screen. The working principle of the infrared thermal imaging camera is to convert the collected radiation information into a temperature map that is easy to observe and recognize, and the temperature value of each point can be obtained from the image. This is also the basic working principle of the instrument used during the SARS period. Real-time monitoring of a large area, normal temperature imaging shows normal, special marking for temperature exceeding the standard, only a small amount of manpower can complete a station or port detection.