The principle of temperature measurement of infrared camera

The principle of temperature measurement of infrared camera

As long as the temperature of an object in nature is higher than absolute zero, it will continuously radiate energy outward. Therefore, in theory, as long as the corresponding relationship between the radiation energy of these objects and the temperature is found and collected, after certain processing, a thermal image corresponding to the target radiation distribution can be obtained.

In general, electromagnetic waves radiated by objects with a wavelength of 0.76 μm-1000 μm are defined as infrared light waves. Infrared light is divided into four bands according to wavelength: near infrared (0.75μm～3.0μm); mid-infrared (3.0μm～6.0μm); long wave infrared (6.0μm～15μm) and extreme far infrared band (15μm～1000μm). The study found that the penetration of infrared radiation into the atmosphere has a great relationship with the wavelength. Only a few specific bands of infrared radiation can penetrate the atmosphere well. The researchers called these specific bands "atmospheric windows." The main atmospheric windows include 2μm-2.6μm, 3μm～6μm and 8μm～14μm. 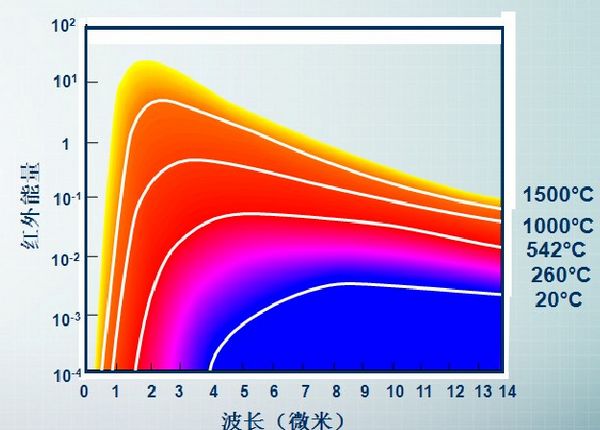 The picture shows the Planck curve

Infrared thermal imaging technology is to image in the "atmospheric window" band using infrared radiation. At present, the most researched in the field of infrared imaging is to use two wave bands of mid-wave infrared (3μm ~ 5μm) and long wave infrared (8μm ~ 14μm) for detection, and convert the radiation of these bands into images that can be observed by the human eye and can be measured and analyzed. data.

When the theoretical conditions are met, the infrared detector and the optical system first perform infrared scanning on the target object; then gather the infrared radiation information on the detector, convert it into an electrical signal, and perform a series of amplification processing; finally these When the information is transmitted to the display, the temperature distribution of the target object can be displayed. Infrared camera not only has the function of temperature measurement, but also has the function of drawing the temperature distribution of the measurement object, which can convert the grayscale image into a pseudo-color image.

Under normal circumstances, the scanning methods of infrared thermal imaging cameras can be divided into two types: one is optomechanical scanning, which requires the use of unit multi-element photovoltaic or wide-conductivity infrared detectors. Since the unit detector is restricted by the frame response speed, the system response time is longer. Multi-array detectors are usually used to quickly and accurately display the temperature distribution. The second is the non-scanning form, which is a new type of infrared thermal imaging equipment. Compared with the traditional optical-mechanical scanning form, the advantages of the focal plane thermal imaging camera with array-type staring imaging are more prominent, gradually squeezing the optical-machine scanner. Market space. The detector is the core component of the focal plane thermal imager, which can make the temperature image of the target object cover the entire display. The scanning technology is very portable, the image clarity is higher, and it has magnification, auto focus, isothermal display, The extended function of voice annotation can also expand the storage space according to your needs.